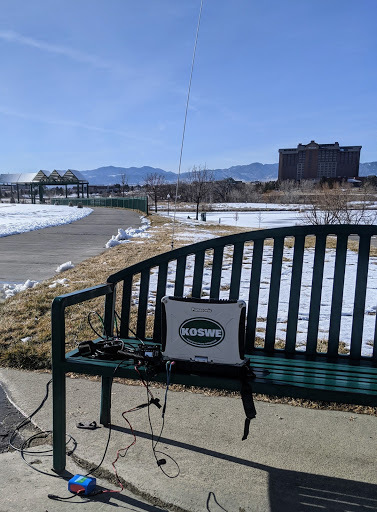 I mentioned in an earlier post that I had pre-ordered a Lab599 Discovery TX-500 QRP HF transceiver. I had hoped Santa Claus would put it under the Christmas tree for me, but Lab599 and HRO delivered not long after. I’m so excited!

I took it out for a spin for the first time last week. I set up in Founders Park in Superior during lunchtime. I paired the TX-500 with a Chameleon MPAS 2.0 in vertical configuration using the MIL whip and extension, and the combination performed much better than I could have ever hoped. I got my first European contact ever: EA2CCG from Spain over 20m FT8!

Yesterday I took it out again, this time in Westminster City Park, and again with the Chameleon MPAS but this time using the SS17 telescoping whip. This time I got my second European contact: LA5KO in Norway on 20m FT8.

It really reinforces for me an oft-repeated fact: the antenna is the most important part of the radio. After having never made an EU contact at home with 100W available, I was able to make both of these EU contacts on less than 10W of power, and I’m convinced that the biggest difference was the antenna. At home I’m using a Chameleon EMCOMM II end-fed long wire, which gets the job done and is HOA-friendly, but it’s right up against my house and I’m sure it’s not doing a great job. Getting out into the park with an open area has really made a difference. I don’t need 100W if I have the right antenna!